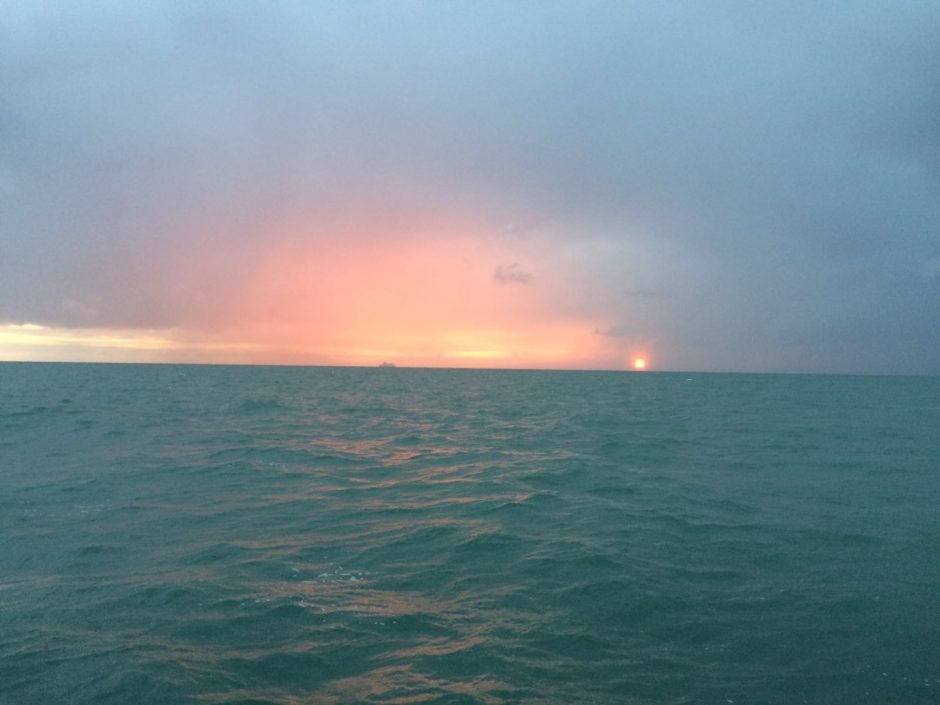 A year ago, my 27 year old son Alex told me he was going to swim the channel.

I had friends who had swum it as a relay, but at the time I didn’t know anyone who had completed this challenge solo.

But then again, at the time, I wasn’t running an open water swim lake, and now that I do……well I got to find out, what a privileged group of swimmers belong to this club

Alex lives in York and mixed his pool training with occasional lake swimming and a weekly swim in the North Sea off Scarborough.  I only see him every couple of months, so really noticed the change in his physique as he bulked up to take on this cold water adventure.

Leading up to the swim date (Oct 9th) he went through the usual self-doubt demons, especially as he had been really struggling with the cold of the North Sea, and he had to get out after an hour on one of his swims in September.  When he found out the Channel was up to 19 degrees though and he had been swimming in 15 degrees, his mood changed and he was back on track and ready to take it on!

The evening before he received a call from the captain of the pilot boat ‘Masterpiece’, to pull the swim forward and meet him at Folkestone Dock at 2am!  So there we all were, Alex and his friends Al and Ben, plus the pilot and adjudicator, Fred and Harry – 6 of us – setting off from Folkestone and round the coast to Dover.  We helped ply Alex with Vaseline and lanolin, attached a light to the back of his goggles and pinned a glowstick to the back of his speedo’s and watched as he jumped our and swam 100 metres to shore, to start his swim.  The search light shone on him, as he stood up, with the white cliffs behind him and then he was off, swimming very steadily towards us and then alongside, as he began his epic challenge.  Conditions weren’t too bad for 3:07am in the morning!  We had some early drizzle and the winds receded the further we went.  We were feeding Alex every hour, so this was a time to really look forward to, as we got to talk to him a little and gauge how he was.  Channel rules specify no holding onto anything, so his feeding ‘vessel’ (which was a protein shaker) was tied to a very long length of string and passed to him at the edge of the boat.  For the first three feeds we went for porridge and then for feed 4 it was minestrone soup with some plain grilled chicken, to add in some protein.  He had now been swimming 4 hours and it was now getting light, so this really gave him a boost.  It was now that we too really appreciated the scale of the channel from our little boat.  The white cliffs were still very visable and we could just make out land on the other side, although it was still 18 miles away! 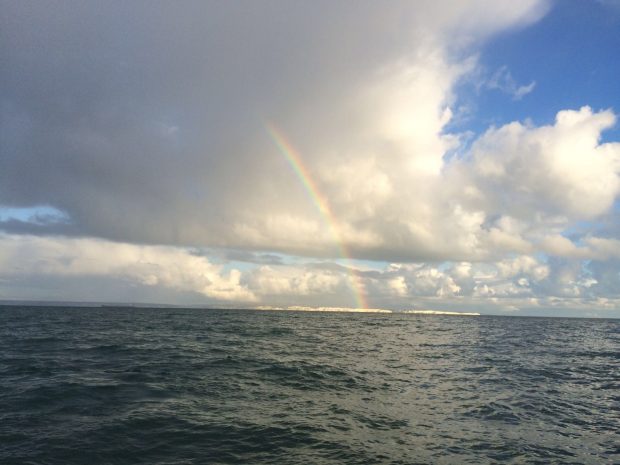 I had brought a couple of wetsuits, as I was allowed to swim alongside Alex for max 1 hour, and he wanted this as a boost.  I decided to get in at 6 hours and swim through until the next feed.  This took him well past half way and really lifted him, although I was really pleased to be getting out after an hour as I was getting cold! 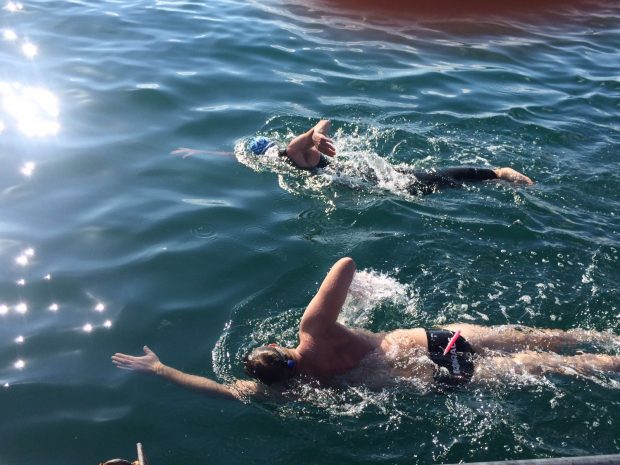 As we moved towards France and hit mid-morning the sun came out, the sea calmed and I couldn’t wait to join him again but limited this to half an hour this time!  His friends Al and Ben also wanted to jump in and swim with him for a little and it was so lovely to see his pals swimming alongside giving him even more of a boost. 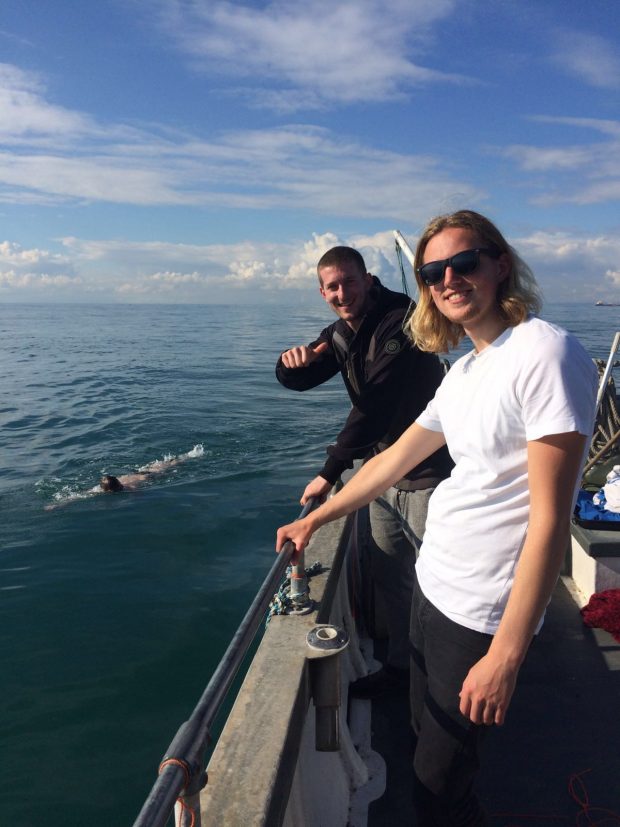 He was now 10 hours in and was only 5 miles from France.  The sea was calm and he was making great progress, but just as you thought he was going to cruise in the tide changed and started to zap his energy.  His progress slowed and he was starting to worry about why the coast didn’t seem to be getting any closer.  The Cape is the nearest land point and missing it to the south is not a good idea, so the pilot kept us more central and as we approached it at about a mile out, the tide changed, taking us slightly North. 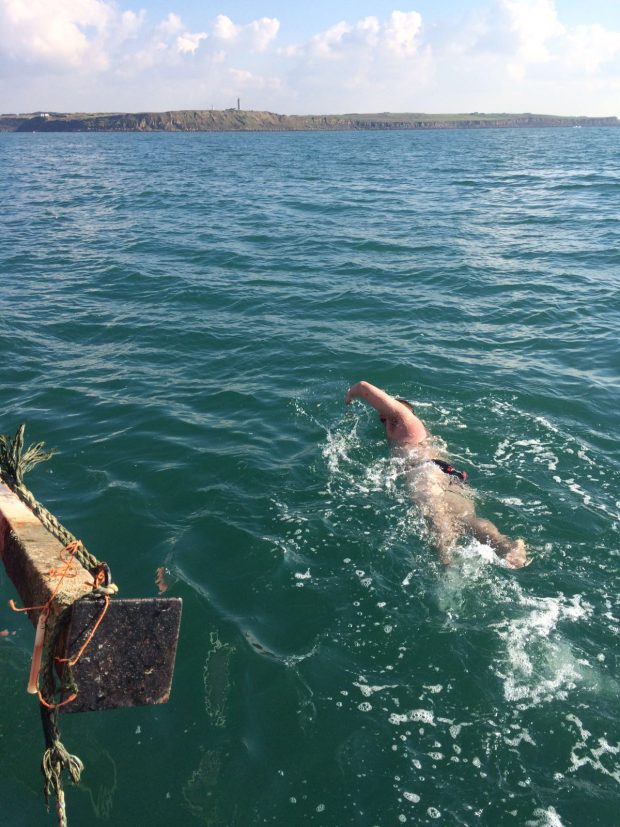 Alex seemed to sense that he really had to work hard now, as he didn’t want to drift too far round with the tide, so he upped his effort to 20 minute mile pace to break through this final thousand metres.  As the waters got shallow Harry launched his dinghy and rowed in the final 400 metres.  We watched on as  Alex reached the breakers and body surfed to the beach.  A local photographer ran over to congratulate him and there he was, standing tall on french sand, looking back to us cheering and waving. 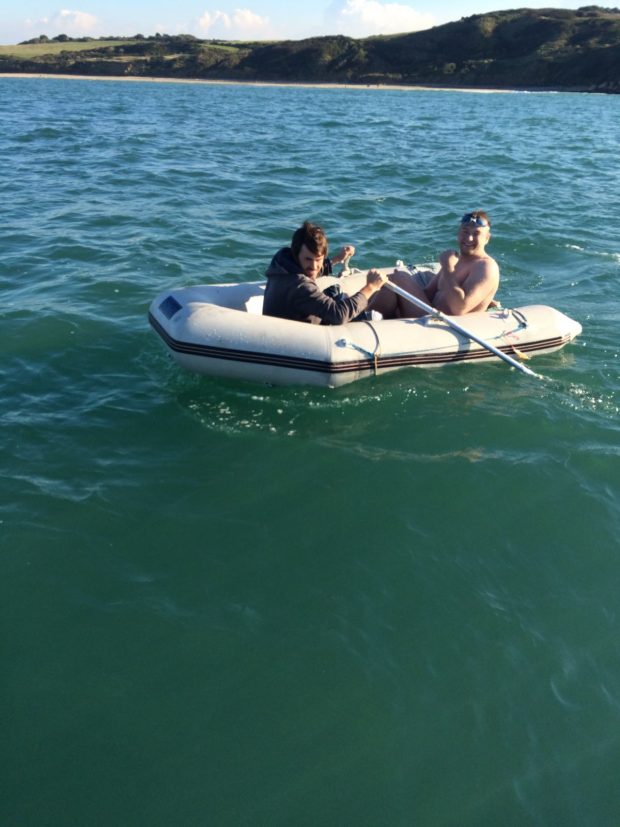 So proud, so much admiration for achieving this most epic of sporting challenges and in a fantastic time of 12 hours and 46 minutes! 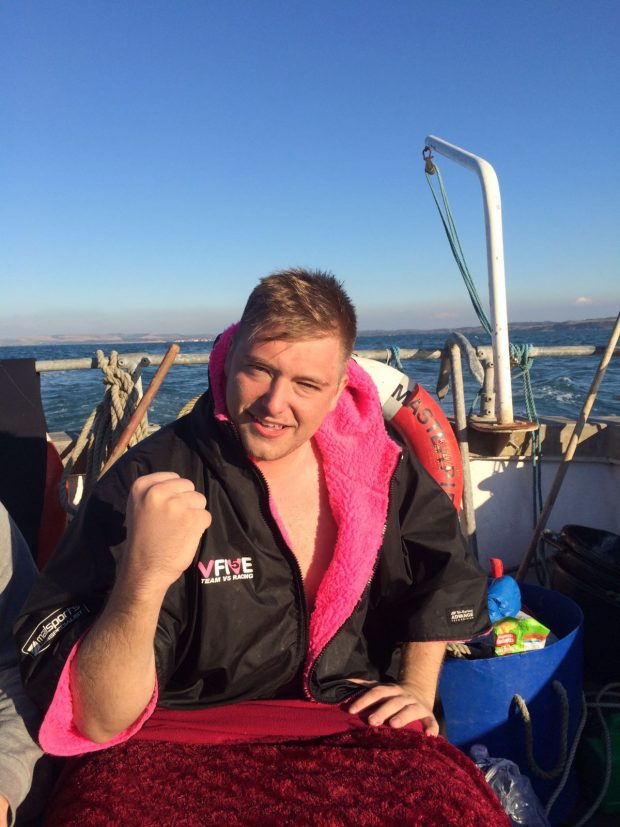